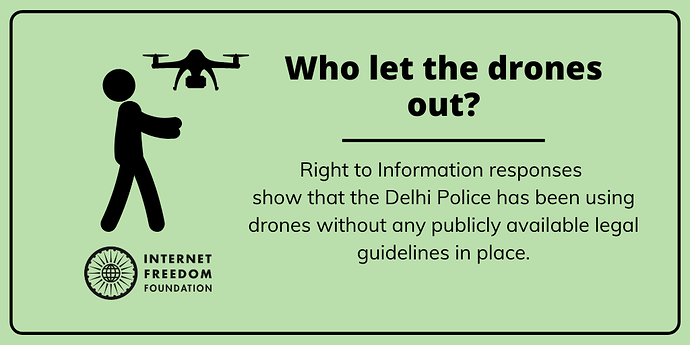 With reports now emerging that the Delhi Police is using drones to check for people who are breaking the curfew in Delhi, we examine responses we have received in reply to Right to Information requests filed about the usage of drones in Delhi in February. The Delhi Police admits to hiring drones for various purposes over the course of the last few months including the 2020 Delhi Legislative Assembly elections and during the riots in North-East Delhi. This is being done with no guidelines in place for their use and thus are not only a violation of the right to privacy of individuals but also a tool of mass surveillance in the hands of the government.

The Delhi Police has been using drones for surveillance of crowds for quite some time now. The first reports emerged in December, 2019 when it was reported that anti-CAA protests had been surveilled via drones to keep a close eye on the protesters. This was in addition to the Delhi Police’s use of Fa cial Recognition Technology to identify the protesters (read our previous blog post where we sent a notice to the Delhi Police to cease such use here ).

Now reports are emerging that the Delhi Police is using drones to ensure that people do not violate the 21-day curfew imposed by the Government in a bid to combat the spread of the COVID-19 virus.

On February 14, 2020, we filed a Right to Information request with the Delhi Police asking the following questions:

Our request was transferred to various departments of the Delhi Police. We received replies from multiple departments denying any use of drones by them. However, in a reply dated March 13, 2020, the Public Information Officer (PIO) of the North-East District, Seelampur, Delhi Police confirmed that they have been using drones.

Here is a point-wise summary of their reply: 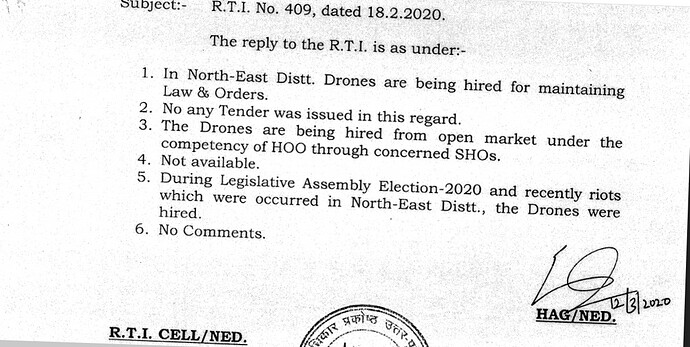 Why does this matter anyway?

There are multiple problems in the way that drones are being used in Delhi.

IFF has consistently been against use of such invasive technology especially in a legal vacuum . The only regulations for drones in India are those which subsist for commercial purposes and which have been developed by the Directorate General of Civil Aviation (DGCA). Drones are being used in Delhi without any guidelines, rules or standard operating procedures which have been made publicly available. It is our opinion that use of such technology can never be justified if not done in a transparent manner. We urge the Delhi Police to make any such guidelines, if they exist, publicly available. If not, we urge the Delhi Police to immediately cease such use. This is because even in extraordinary times such as these, we have to ensure that basic fundamental rights, such as privacy, are not the scapegoats which have to be sacrificed for the purported greater good.

Delhi Police admits to using drones on civilians without any publicly...

With reports now emerging that the Delhi Police is using drones to check for people who are breaking the curfew in Delhi, we examine responses we have received in reply to Right to Information requests filed about the usage of drones in Delhi in...