The Economic Survey 2020-21 was presented in Parliament today. While the emphasis laid on improving access and equity is commendable, we feel there are certain concerns that the economic survey must tackle. These include questions raised about the commercialisation of healthcare and the viability of remote learning in the Indian context, as well as the overarching paradigm of viewing data primarily as a resource.

On the whole, the Survey does seem to recognise the risks posed by the indiscreet application of emerging technologies to privacy. At a more granular level, though, the Survey seems to view the existence of information asymmetries in the health sector as the primary concern, in lieu of which it prescribes the use of emerging technologies to remedy such problems. Such an approach may result in other issues, given the extractive model of data collection envisaged under the NDHM mission. Other concerns, such as the the commoditization of citizens’ data in the absence of a robust data protection legislation and the Aadhaar-centric nature of framework, also abound and may have wide-ranging implications for data security and exclusion from welfare entitlements.

Given the central role accorded the health sector by the Survey, the acknowledgement that “unregulated private enterprise can create significant negative effects” is key (even more so in the health sector). Issues of data privacy and access loom even larger in the case of private healthcare, and so it is also heartening to see moves towards increasing public expenditure. In a pandemic ravaged economy, not only will such steps generate strong fiscal multipliers but also solve issues of access, exclusion, and affordability. However, the need to ensure the protection of citizens’ data still remains, if only to ensure that the receipt of constitutional welfare benefits does not become predicated upon the invasion of privacy.

The Economic Survey 2020-21 is to be commended for focusing on access and equity, but the template which has been set is concerning. Following in the footsteps of the chapter 4 of the Economic Survey 2018-19, it views data as a resource and accords data commoditization a higher priority than the safeguarding of digital rights. This technocratic approach may work to the detriment rather than the progress of citizens, eventually creating more issues than it has set out to solve.

The Survey acknowledged that unregulated private enterprises can create significant negative effects. The 2018-19 Survey itself noted several harms to privacy and data security which are yet to be addressed. Moreover, we still do not have a comprehensive data protection legislation that will safeguard our data protection and privacy from excessive public and private interference. It is imperative that this is enacted with proactive stakeholder consultation, because automated decision making needs regulation, and the possibility of biases and excursions must be considered. To do this, existing and expansive critiques must be urgently taken into account.

One important trend in healthcare that was witnessed over the last year is the burgeoning adoption of telemedicine and eConsultations. As might be expected, these were given a huge fillip by the lockdown.

As the Survey itself notes, apart from an optimal level of health infrastructure ,the smooth functioning of telemedicine depends on robust internet connectivity. In light of this, the importance given to healthcare implies an equivalent level of importance for internet access. Furthermore, given the increasingly digital nature of the modern economy, internet access is a vital component of daily life. Thus, it is essential that the fundamentalness of access to internet be acknowledged by the Survey and that internet access be recognised as a ‘basic necessity’.

The Survey point out the progress being made towards improving the deep digital divide that exists within the country: overall teledensity, the number of internet subscribers, and average wireless data consumption per month are all increasing, while average data costs are falling. The Centre’s BharatNet project has also established full network infrastructure in 93% of the targeted Gram Panchayats.

However, given the aforementioned significance of internet access, it is regrettable that the Survey does not take cognisance of the increased number of internet shutdowns. Internet shutdowns have been criticised for their all-encompassing nature, which results not only in significant curbs upon the Right to freedom of Expression but also causes significant economic losses. Concerns about human rights have also been raised.

The COVID-19 pandemic has hastened the use of remote-learning and distance-learning technologies. While to some extent necessitated, the widespread adoption of such technologies will inevitably result in an educational divide across various groups, with low income rural children being impacted the most. 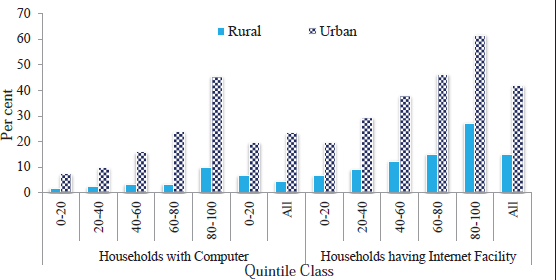 To remedy this, the Centre has undertake several initiatives to improve digital technology for education, including establishing the PM eVIDYA scheme to unify all digital education efforts and increasing budgetary support to States for digital education initiatives. Such efforts may not be enough, as may be witnessed by increased dropout rates due to a lack of resources, and so significant budgetary capacity must be allocated to ensure that a generation of students receive the education they deserve.

Additionally, the increasing use of facial recognition technology through proctoring software and student authentication portals bring with them tremendous risks to the privacy of students.

The lack of R&D investment has also been acknowledged, especially given the size of India’s economy and its level of development. A key reason for this is low gross domestic expenditure on R&D (GERD). The Survey also indicates a poor performance with respect to capacity, with the levels of researchers and R&D personnel being low compared to India’s population. 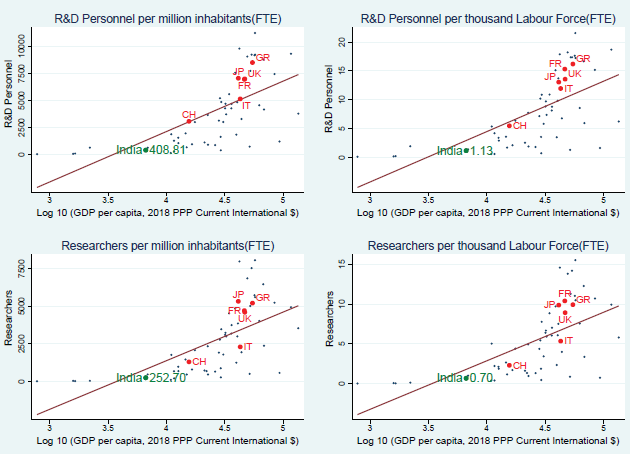 The National Science Foundation of the US has said that 80% of the jobs that will be created in the next decade will require some amount of mathematical and scientific skills. Resolving these twin issues will play a key part in developing a thriving scientific community, fostering innovation, and ensuring that India’s economy is well equipped for the 21st century.