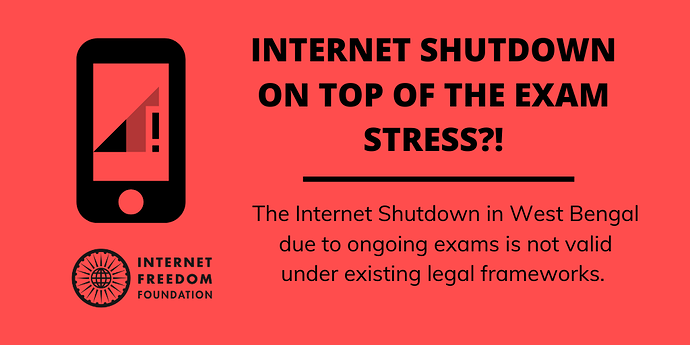 IFF has written to the Government of West Bengal responding to the reported Internet Shutdowns taking place from 18-27 February, 2020 across 7 districts in West Bengal as they have been purportedly passed to prevent cheating in exams. These shutdown orders lack legal basis and they violate the Supreme Court’s recent decision in Anuradha Bhasin v Union of India as well as the the Temporary Suspension of Telecom Services (Public Emergency or Public Safety) Rules, 2017.

According to a news article published in the Telegraph on 18 February, 2020, the West Bengal Government has ordered that the internet will be shut down from the 18-27 February, 2020 in 42 blocks across the 7 districts of Murshidabad, Malda, South Dinajpur, North Dinajpur, Birbhum, Jalpaiguri and Cooch Behar for the duration of the Class X Madhyamik exams.

What the law states!

First, the Telecom Suspension Rules can be evoked only to prevent a public emergency or in the interest of public safety. This is a very high threshold and preventing cheating in exams does not satisfy it. In the past, the legality of imposing internet shutdowns to prevent cheating in exams has been challenged before the Rajasthan High Court. However, the case was disposed after the Rajasthan Home Department submitted an affidavit that it would not impose internet shutdowns for this reason again. (Read IFF’s post on the Rajasthan Internet Shutdowns here)

Second, on January 10 2020, a three-judge bench of the Hon’ble Supreme Court of India in Anuradha Bhasin v. Union of India [WP © No. 1031 of 2019] recognised that freedom of speech and expression under Article 19(1)(a) and freedom of profession, occupation, trade and business under Article 19(1)(g) extends to the internet. Therefore, restrictions on access to the internet which affect the exercise of these fundamental rights must necessarily satisfy the proportionality standard. In its verdict, the Supreme Court also held that all internet suspension orders must be made available to the public and internet shutdowns cannot be resorted to if there are less restrictive alternatives available… (Read IFF’s analysis of the judgment here).

Why is this a big deal?

In an increasingly digital society, an internet shutdown is a shutdown of essential facilities and conveniences such as online banking, ride hailing services, e-commerce platforms etc. It impacts working professionals, freelancers, small and medium business owners and even senior citizens who today rely on it to reach their loved ones and for information gathering to keep themselves safe.

Even relatively short internet shutdowns can cause significant losses. For instance, the Cellular Operators Association of India (COAI) estimates that telecom operators lose INR 24.5 million per hour in every circle area where there is a shutdown or throttling. COAI’s Director General, Mr Rajan Mathews has even stated that other businesses which rely on the internet could lose up to 50% of the aforementioned amount. Therefore, a measure by a state government to suspend internet services to prevent cheating is not only disproportionate but completely shortsighted.

To prevent internet shutdowns for such reasons, we have called upon the West Bengal government to immediately publish the internet shutdown orders in accordance with the guidelines laid down in Anuradha Bhasin v. Union of India. We have also urged the West Bengal Government to issue a statement that henceforth, internet suspension orders will not be issued in circumstances where there is no public emergency or threat to public safety as required under Section 5(2) of the Telegraph Act and the Telecom Suspension Rules.

Want to ensure that your best teacher (Google) is able to help you study? Help IFF #KeepUsOnline by becoming a member today!

Here’s my reply to SP Shukla, Mahindra Innovative Academy who also suggested that internet shutdown can be experimented: https://mobile.twitter.com/neerajk90/status/1164108652120334337

We really undermine integrity and honesty in our society. Fear and mistrust are very deeply rooted. And the way India has been governed and managed over last few decades by politics and bureaucrats, it’s not as negative a behavior as otherwise would have been presumed.