In collaboration with Civic Data Lab, we have submitted our comments on the Draft 5th National Science, Technology, and Innovation (STI) Policy. In our comments, we highlighted several issues, including the need to expand STI capacity by increasing R&D spending, improving inclusion and access, and promoting open science.

The existing state of play

As the world proceeds further into the 21st century, it is clear that the future is digital, and that emerging technologies that hitherto could barely be countenanced will change human lives in a significant way. The National Science Foundation of the US has said that 80% of the jobs that will be created in the next decade will require some amount of mathematical and scientific skills. In such a context, It is imperative that India prepares itself for such a future by possessing a thriving scientific community and a booming technology base. The challenge is to create systems that harness a large number of graduates in the sciences and engineering to improve India’s science and technology ecosystem.

As per S&T indicators collected and compiled by NSTMIS, DST, GoI in 2019, India’s GERD has been stagnant to just 0.7% of the GDP for the last 5 years. When compared to 31 most developing & developed countries, India ranks at a concerning 26th position standing last among the BRICS nations. 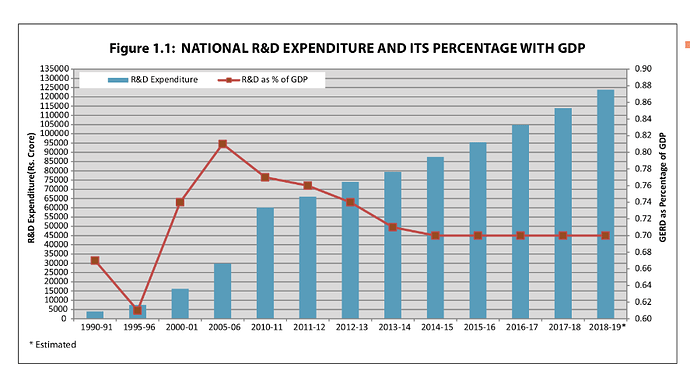 Further, the S&T indicators highlight the need to set clear fiscal targets to increase India’s per capita expenditure on research & development from 47.2 (current PPP$) to 300 (current PPP$) coming slightly above the current world’s average in next 5 years. 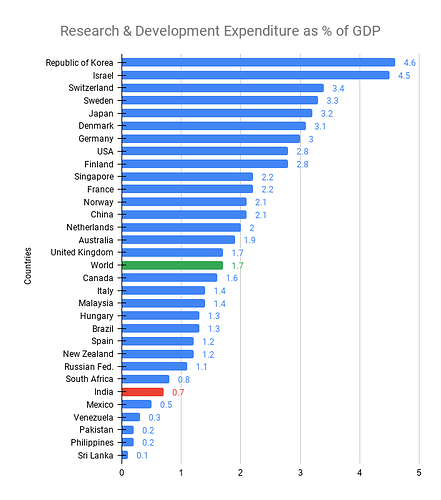 Meanwhile, in spite of recent strides, private sector investment in R&D remains low: in 2004-05, the private sector accounted for 28% of research spend; it was 40% in 2016-17. Indian corporate hesitancy about spending on R&D is well documented, with most private sector entities having “a limited risk-appetite to invest in futuristic technology.”

Lastly, while things have been improving, many concerns with respect to exclusion in STEM fields still remain. For example, in 2017, the share of male students enrolled in engineering and technology is 71.1% compared to female enrolment, which is just 28.9%. Meanwhile, as of 2019, central government data indicates that across 23 IITs only 2.8% of the faculty come from SC, ST, or OBC backgrounds.

We believe that the draft policy contains many excellent proposals. We appreciate the key themes and guiding principles being laid down, and at the same believe a certain amount of granularity in terms of implementation must be added to ensure that the frameworks laid down here actually come to fruition. While such lofty goals are eminently laudable, without a way to measure these progress towards these goals there is a danger of such outcomes simply remaining words on paper. Furthermore, there remain certain outstanding issues particularly focussed on rights based frameworks which must be addressed.