The need to investigate the NSO Group, which was behind the Pegasus software, is now more than ever 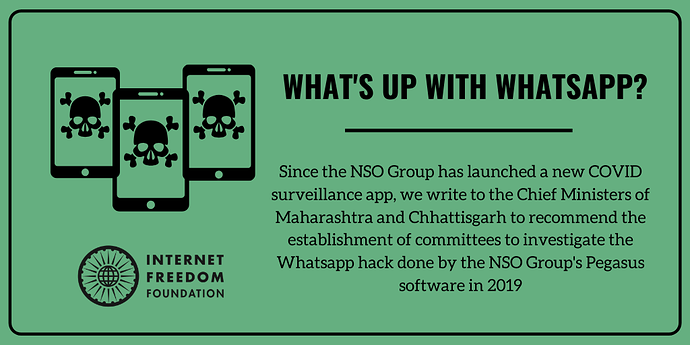 According to a Hindustan Times report dated April 07, 2020, the NSO Group has created a surveillance application to track COVID-19 infected patients which they have been actively pitching to almost a dozen governments around the world to use. This is the same company which was behind the Pegasus software that was used to hack the Whatsapp applications of a substantial number of Indian citizens mainly journalists and human rights activists in May and June of 2019. Mindful of the potential harms of this COVID-19 application being used by the Indian government, we wrote to the Chief Ministers of Maharashtra and Chhattisgarh urging them to establish committees to investigate the Whatsapp hack. Our key recommendations were to include victim and expert testimony in the investigation which should be carried out in a transparent manner.

Last year on May 14, 2019, an article published in the Financial Times for the first time reported that Whatsapp, “discovered that attackers were able to install surveillance software on both iPhones and Android phones by ringing up targets using the app’s phone call function.” As per a statement by Whatsapp, this vulnerability was patched and closed. On October 30, 2019, Indian Express published a report containing statements made by Whatsapp which confirmed that the victims of the hack in India were mostly Indian journalists and human rights activists. Of these a significant number are situated in Maharashtra and Chhattisgarh as the hack targeted lawyers related to the Bhima-Koregaon case in Maharashtra and Dalit activists in Chhattisgarh.

What is the law related to hacking?

Surveillance such as this which was carried through the Pegasus software developed by the NSO Group puts the personal and informational privacy of citizens at risk. This goes against the decision in J ustice K.S. Puttaswamy vs Union of India which affirms informational privacy as one of the facets of the right to privacy.

Additionally, the Information Technology Act, which deals with interception of data, expressly prohibits hacking. Under S. 66 of the Act, hacking is a criminal offense punishable by imprisonment for a term which may extend to three years or with fine which may extend to five lakh rupees or with both.

Attempts at reputation laundering by the NSO Group

We are bringing this up again right now because we are especially concerned about the operations of the NSO Group in India. It was reported in the Hindustan Times on April 07, 2020 that NSO has now developed a surveillance app to track the spread of the COVID-19 virus. The report also said that the NSO Group is “actively pitching surveillance tools to their governments and to others around the world.”

It was not made clear whether NSO has approached the Indian Government. However, since the NSO Group has already been accused of illegal surveillance, privacy experts are of the opinion that the company might try to exploit this crisis to market intrusive systems. The coronavirus pandemic presents a golden opportunity for corporate actors like the NSO Group to recast previously unpalatable behavior as life saving intervention.

Help IFF in holding such companies accountable for their illegal actions by becoming an IFF member today!

The need to investigate the NSO Group, which was behind the Pegasus software,...

We wrote to the Chief Ministers of Maharashtra and Chhattisgarh urging them to establish committees to investigate the Whatsapp hack. Our key recommendations were to include victim and expert testimony in the investigation which should be carried out...