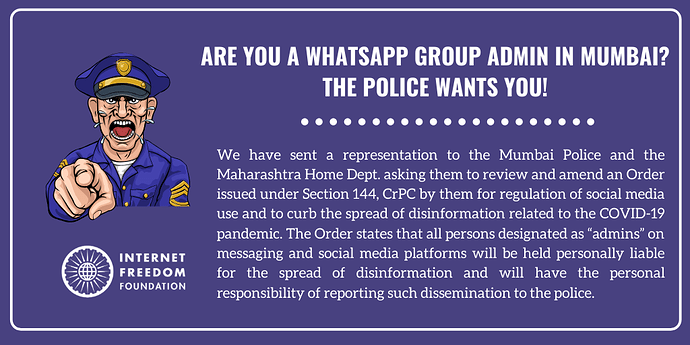 We wrote to the Mumbai Police asking them to review and amend their Social...

On May 23, 2020 the Mumbai Police issued an Order under S.144, CrPC. The order prohibits the spread of certain information through social media platforms. We have sent a representation to the Mumbai Police & the Maharashtra Home Dept. asking them...

In an Order u/s 144 CrPC, the Mumbai Police has cracked down upon social media use. The Order regulates content which could cause panic among the public and incite mistrust towards the government.

The order has been challenged on the basis that it fails the proportionality test as required under K. S. Puttuswamy v Union of India. The petition also states that the order can be used to target innocent people or people who are critical of the government response and thus be used to oppress dissent. Since criticism and dissent is essential in a democracy and also protected under the Constitution, the petition seeks to get the impugned order quashed.

However, it is also pertinent to note that misuse of S.144 of CrPC has become aa disturbing trend over the years. In the last few months various news platforms have reported instances where the State has invoked Section 144 of Cr.P.C. While, the section has been used in common parlance by professionals and...

Do you think such crack down on social media use is helpful in curbing disinformation?