Which books are you reading these days?

Hey folks, I’ve been meaning to get back into the habit of reading. So tell me, what’s your most favourite book? I’m going to be super ambitious and try to read a book a week!

Oh! I do the book a week thing too

Midnight Sun by Stephenie Meyer (makes me feel like a teenager) and Trevor Noah’s Born A Crime (he’s hilarious).

I just finished Vaccinated. The next episode of my world-famous podcast with 13 listeners will be about Hilleman.

After this I want to take a break from non-fiction and continue with Discworld. I’m looking forward to starting Eric.

Hello! One of my siblings’ worships Terry Pratchett and the other day we just sat and read some of the best stuff he’s written in the Discworld series and man. Genius writing. Very few people use language the way he does.

Bonus for everyone on this forum! This photo is Neil Gaiman’s acceptance speech for his Hugo Award. Why should I be the only one crying! 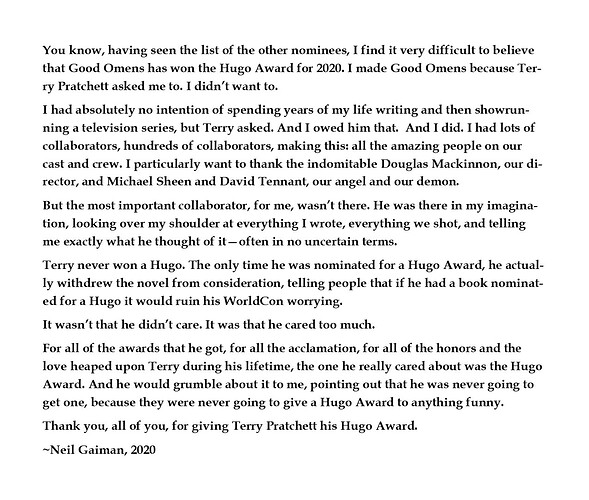 So many great recommendations! Please keep them coming!

I am currently reading Everything is Obvious by Dunca Watts. It is about how our individual and collective “common sense” is molded, and often fooled by things that happen around us.

Wow, didn’t know it was actually published. I remember reading the 12-chapter draft from (checks the internet) 2009. Time flies.

Currently re-reading The Stormlight Archive by Brandon Sanderson and skim reading Game Changer: AlphaZero’s Groundbreaking Chess Strategies and the Promise of AI, which is wayy above my understanding of chess. But the AI parts are cool.

Looking forward to reading The Wall by Gautam Bhatia when it comes out next week.

Highly recommend Educated by Tara Westover. One of the most inspiring reads of all time.

I just finished Toms River by Dan Fagan, which is an Erin Brockovich-esque non-fiction book about cancer clusters in an industrial town and makes some great points about how the focus on cancer research has shifted from occupational hazards and industrial pollutants to individualistic lifestyle causes like smoking. (Yes, I read an ungodly amount of medical non-fiction to make up for the fact that I went to law school instead of med school :P)

Will probably read Inferior by Angela Saini next which was recommended by @aparatbar and looks great!

On the fiction front, I am looking forward to reading the Wall by Gautam Bhatia, which will be my first foray into sci-fi

There are some excellent recommendations! I hope to check out the ones made by @_themessier, @nemo and @emsood9. Some of mine.

I’m currently reading this book called “No Friend But The Mountains”.

It was written by Kurdish-Iranian journalist Behrouz Boochani and it’s about his incarceration of 5-ish years at a detention centre on Manus Island in Papua New Guinea.

Interestingly, the entire book was written secretively via text messages/WhatsApp messages. It recounts the tortures inflicted upon thousands of distraught refugees by the Australian Government. It is quite an eye-opener as I had no idea about the stringent immigration policy adopted by Australia.

Bonus point, Boochani is a poet. So, the book flows beautifully and there’s a wonderful mix of poetry too. I feel grateful for all that I have and I feel pain for the suffering of millions with every page that I turn.

Also, I love the amazing recommendations in this thread ! Bookmarked.

Late response, but I hope this is still wanted!

I am currently reading Paul Bloom’s Against Empathy: The Case for Rational Compassion, which makes its case against the idea of empathy as the ultimate source of human morality and goodness. Bloom actually argues that empathy often leads to poor judgment and cruelty, which is quite curious. The book is written in a conversational style, so it’s quite easy to read.

I am also plodding through Priyamvada Gopal’s Insurgent Empire: Anticolonial Resistance and British Dissent, which is British history from the perspective of its slaves and colonial subjects, including British critics of the empire. I’ve only managed to get through the introduction, since the writing is far more technical. But Gopal is insistent on correcting the prevalent conception in Britain of the colonies as beneficiaries of a British “enlightenment”; she aims to make the case that this enlightened British conscience was created in part by the insurgency staged by slaves, indentured servants and colonial subjects in the British colonies.

I’m also re-reading Philip K. Dick’s Do Androids Dream of Electric Sheep? because I watched Blade Runner and found it engaging enough to want to return to the book it was based on.

EDIT: I have another book in my list, one that I stole from my dad’s shelf: The Net Delusion: The Dark Side of Internet Freedom by Evgeny Morozov. This one might be interesting for the members of this forum! From what my dad has said about this book, it’s generally pessimistic about the ability of technology to liberate or transform society, and situates the internet as more of a tool of society, at best merely changing the way that governments repress its citizens (and at worst, enabling governments to do so).

I haven’t read this, so don’t take my word for its contents! Do check it out for yourself.

, I have decided to be very selective in what I read. So, I stopped everything that I was reading and have started the following:

The effort is to read the best. Only the best.

Hi Everyone!
I am new to this platform and I really appreciate this initiative. I am a law student and currently, I am reading these books:

Next in line is Lewis Mumford’s Technics and Civilisation.