Crucial: NIC says it doesn’t have any information on changes made to RTI Portal

We had filed a request for information under the RTI Act, 2005 with the National Informatics Centre under the Ministry of Electronics and Information Technology over the disallowance of new users to sign up on the Right to Information portal. Moreover, the RTI Portal also has two new pop-ups which a user needs to close before they can access the website and exercise their right to information.

We believe that in the absence of having an option to sign up, every user will now have to manually track each RTI request, therefore discouraging people from exercising their rights by creating unnecessary difficulties. Further, pop-ups on the portal may be additional barriers to the right to information, which is in clear contravention with the RTI Act, 2005. Lastly, we requested information on any notice issued or file notings after which the UI change was made including disallowance of new users to register:

In their reply dated December 10, 2021, on queries in points 1, 2 and 4, NIC has replied that “no material information is available in records of the answering officer” on the questions in the RTI application.

Further, on our request on the pop-ups, they have cited an email from the Dept. Secretary to PMO Amrapali Kata stating that all websites have to prominently display details/ content relating to Azadi ka Amrit Mahotsav. Therefore, the change in the user interface. 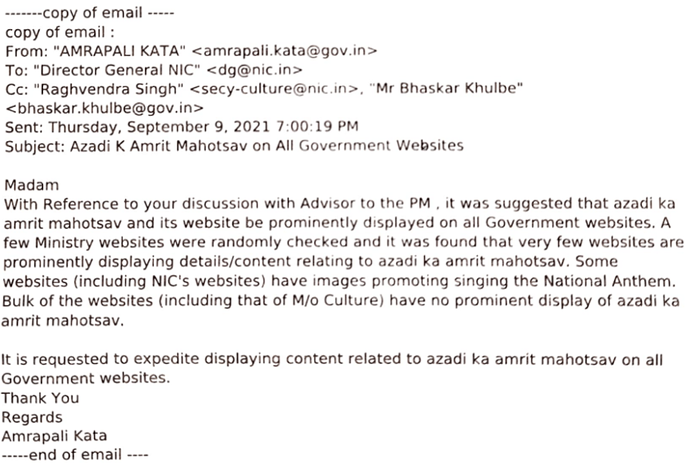 It is unfortunate to note that NIC does not have any material information on record with regards to the change in disallowance for new users to register, in clear violation of the RTI Act, 2005 which aims to secure access to information under the control of public authorities.

We have filed a first appeal against the reply, to seek information and file notings on the disallowance of users on the portal.

I really like how the same official had 2 sets of answers. I had filed an RTI too. I never got any answer from DoPT though. 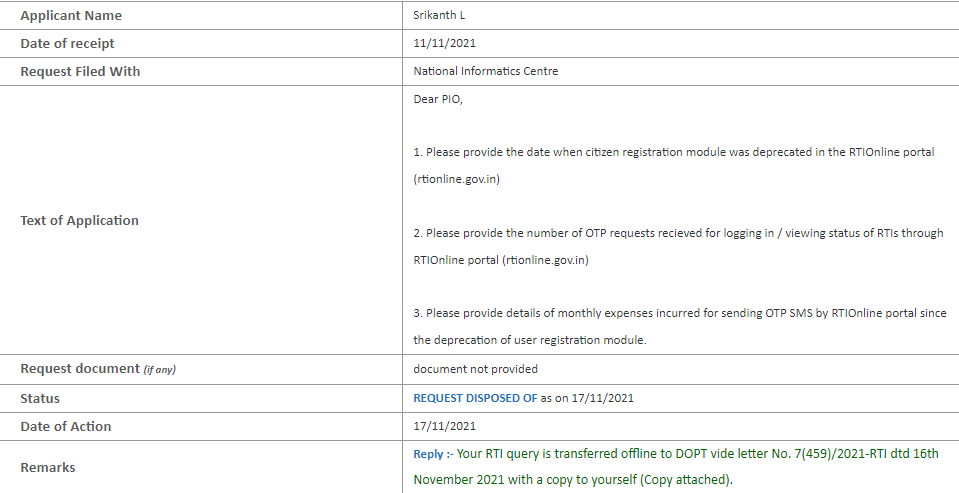 UPDATE: In their reply to our request for information on the disallowance of new users to register on the RTI online portal, the Department of Personnel and Training has now responded to us as follows:

The response cites the disallowance of new users to register as a ‘remedial action’ to ‘increase the response time’ [sic] and reduce the server load. However, no assessment has been provided to demonstrate whether such changes were necessary or how they have improved the efficiency of the RTI online portal. Further, the reply seems to equate the login option with the ‘view history’ feature.

The response of the department is unsatisfactory because:

It must be noted that the S.6(2) of RTI Act, 2005 does not mandate compulsory sharing of “any other personal details except those that may be necessary for contacting him”, and there is a provision to share an email address and the physical address of the applicant for the purpose of receiving either a digital copy of a physical copy of the information sought. Therefore, this decision to structurally mandate sharing of phone numbers cannot be justified on grounds of a necessary detail for contact. Unnecessarily mandating sharing of additional contact details such as phone numbers can have a chilling effect on citizens and, in case of any leak or proactive disclosure, result in physical threats to them. 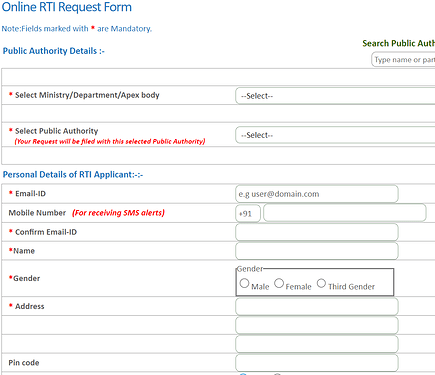 This indicates a lack of transparency in the process followed in modifying the RTI online portal. In absence of any documentation, the changes made to the RTI online portal seem to have been done without any consultation with other stakeholders despite the huge ramifications they will have on citizens’ rights. This might also discourage citizens from exercising their right to information.

Citizens and civil society organizations, including IFF have used RTI as a powerful tool to hold governments and public officials accountable, and advance citizen rights. Requests made under the RTI Act, 2005 further digital rights by enabling greater transparency on issues such as internet shutdowns. We have previously filed requests for information on internet shutdowns ordered in Rajasthan, Meghalaya, Maharashtra, Haryana and several other states. We have filed an RTI request seeking assessment reports of portal functionality and tangible data on the efficiency brought by the changes made. We have again iterated our request for documentation of the changes through a first appeal challenge to the response received.