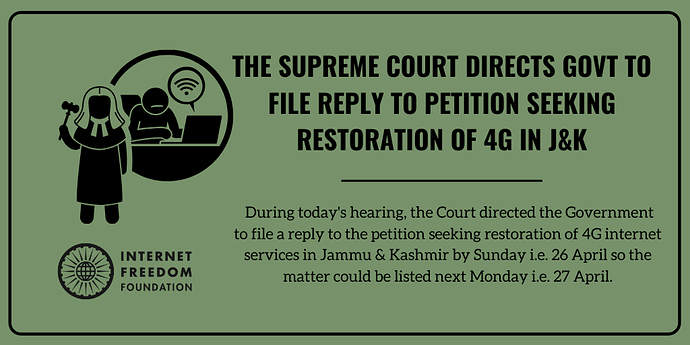 On 31 March, the Foundation for Media Professionals filed a petition before the Supreme Court seeking restoration of 4G internet services in Jammu & Kashmir during the COVID-19 crisis. During the first hearing on 9 April, the Court issued notice to the Standing Counsel for Government of Jammu & Kashmir. The matter was listed again today i.e. 21 April and the Court directed the Government to file a reply to the petition by Sunday i.e. 26 April so the matter could be listed next Monday i.e. 27 April.

Foundation for Media Professionals (FMP) had filed a petition before the Supreme Court for restoration of 4G internet services in Jammu & Kashmir on 31 March. The petition was first listed for hearing before a 3 judge bench of NV Ramana J., Subhash Reddy J. and BR Gavai J on 9 April. During the hearing on 9 April, the bench issued notice to the Standing Counsel of Government of Jammu & Kashmir. Read more about the petition and last hearing here.

Subsequent to the petition being filed on 31 March, the Government of Jammu & Kashmir continued to direct ISPs to slow down internet speed in Jammu & Kashmir to 2G through orders issued under the Temporary Telecom Suspension Rules, 2017. These orders issued on 3 April and 15 April were also challenged by the Petitioner by filing additional applications.

Practical Impact of the Internet Slowdown

“I have so many patients who are just able to call me this time. I can’t understand what they are trying to tell me exactly…One said,I have pain in the tummy. The tummy is big. It has around 20 organs inside. So then I ask – is it the upper part of the tummy, is it the right side, is it lower? And it becomes very difficult. It’s not possible to accurately pin-point what they’re saying.” -Doctor at Srinagar Government Medical College on need for video facilities

“The universities will hold their exams on time. Then no one will speak on our behalf to say to them – oh, there was no 4G, there were no classes. There will only be exams. Did we get any education? Are teachers being sent to our homes? Is there a door to door drive to ensure that students’ education won’t be affected?" - Student at Degree College in Bemina

The Petitioner also produced a comparative analysis of web performance at 2G and 4G speed to help the Court fully understand the practical consequences of the internet slowdown. This technical report was authored by Mr. Prateek Waghre, a technologist and policy researcher who had previously also analysed functionality of whitelisted websites in Jammu & Kashmir. The analysis revealed that tasks on observed 2G speed can take upto 50 times longer and 2G network conditions were well below the minimum requirements of video streaming/video communication platforms like YouTube, Zoom and Skype. In addition to this theoretical analysis, Mr. Waghre also carried out a simulated test which found that some interactive interfaces like the World Health Organization’s Situation Tracker did not function at observed 2G speeds at all.

What happened at today’s hearing?

During today’s hearing, the bench inquired about a suo moto petition pending before the Jammu & Kashmir High Court on the same issue. In response to this, the Solicitor General, Mr. Tushar Mehta indicated that he requires time to seek more information about the suo moto petition and suggested that it may also be transferred to the Supreme Court.

The Court also sought information about the total number of COVID-19 cases in Jammu & Kashmir. Senior Advocate, Mr. Huzefa Ahmadi appearing for FMP informed the Court that the region had 354 COVID-19 cases. He emphasized that this was a matter of grave urgency and the Government had not filed its response despite notice being issued on 9 April. Therefore, he requested the Court to direct the Government to file its reply expeditiously.

The Attorney General, Mr. KK Venugopal sought to justify the internet slowdown by claiming that the region had a serious militancy problem. However, the bench directed the Government to file a proper written response and record its submissions on affidavit. The Solicitor General, Mr. Tushar Mehta accepted this direction and indicated that the Government will file a consolidated report.

In addition to FMP’s petition, two more petitions seeking restoration of 4G internet services filed by Soayib Quereshi and Private Schools Association of Jammu & Kashmir were also listed for hearing today. Advocate Charu Ambwani representing the Private Schools Association of Jammu & Kashmir highlighted how the education of 27 lakh students was being hampered because they did not have access to high speed internet. In response to a question by the bench, she also stated that most students in Jammu & Kashmir have laptops and tablets so the biggest hurdle is slow internet speed.

After hearing submissions made by all counsels, the bench directed the Government to file a reply by Sunday i.e. 26 April so the matter could be listed next Monday i.e. 27 April.