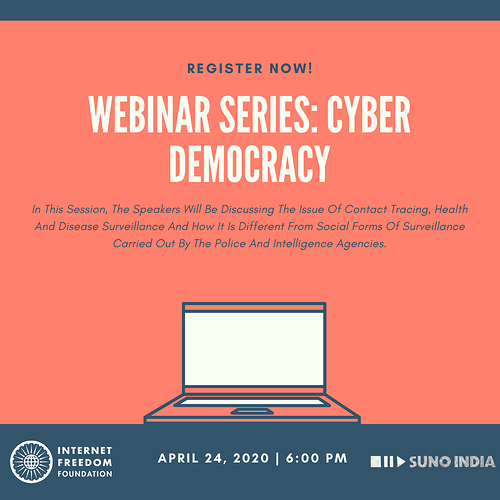 In this session, the speakers will be discussing the issue of contact tracing, health and disease surveillance and how it is different from social forms of surveillance carried out by the police and intelligence agencies.

The response to coronavirus contact tracing has been from the police department instead of health departments bringing in concerns of misuse of information. While a healthcare response is need of the hour, we are witnessing all other forms of reactions but by health practitioners. 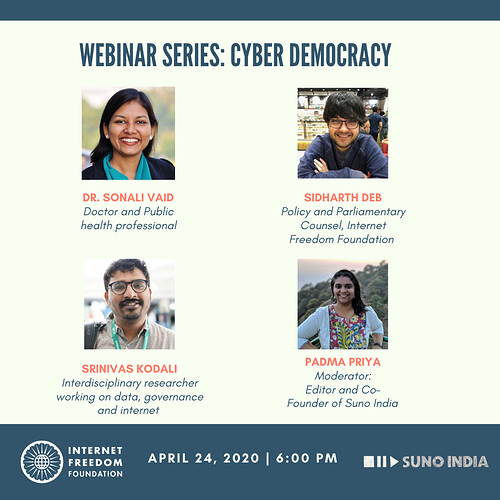 Sonali Vaid is a doctor and public health professional with a decade of experience in improving the quality and safety of healthcare services. She has a Masters of Global Health Policy and Management from the Harvard T. Chan School of Public Health and has consulted for various international organizations, such as the World Health Organization & UNICEF. Her work has spanned India, South Asia, Africa & United States.

Padma Priya is Editor and Co-Founder of Suno India, a digital media (podcast only) platform. She is an independent journalist who has also written for leading media houses such as The Hindu, The Wire, IndiaSpend. She has also worked as an advocacy and communication specialist for Nobel Peace Prize winning organisation Doctors Without Borders.

Which platform will this be hosted in? Please don’t tell me it will be zoom.

Hey folks. The webinar will be converted into a podcast (possibly a two-parter) and our team will be sure to share it in case, anyone is interested in checking it out at a later point.

I must say that I had a great time speaking with and learning from both Dr Sonali Vaid and Srininvas Kodali. Even though it was an almost 90 minute discussion, it certainly did not feel that way and that is also partly down to the Ms Padma Priya’s expert moderation which allowed for the three of us to have an organic conversation on what can usually be a dense topic.

Some of my big takeaways from our discussion is as follows:

I also raised many of our concerns, which we’ve discussed in considerable detail in our working paper which you may read here.

The points raised in this discussion by both Sonali and Srinivas will be help us as we develop an updated version of our working paper which we will share with all stakeholders including relevant government departments.

Would encourage you to check out the podcast when it is available for the public to access.

The tool used by Suno India was not Zoom (@sidharth participated and can confirm). But some webinars may utilize it (right now all of the seminars are with external partnerships/collaborators), and even we have used it in the past for our member (public) calls. We have adopted some practices to preserve the privacy of participants and will look to improve. At the moment we are also developing an internal document that we will publish on how we will implement these practices. Like all things, we will do this with care and if and when we do mess-up will honestly own up and improve.

At the same time, we want you to consider some thoughts that have been buzzing in our internal team conversations.

Oh, and also, today I got Zoom bombed today on the Takshashila lecture (yes, the privacy karma points do add up fast give quick returns).

Thank you for the well articulated reply Apar! I appreciate everything that IFF has been doing to promote internet rights. And you are spot on about the product privacy-trade off. I mean I have been able to completely avoid Zoom, but I have been using Jitsi Meet instead for the webinars I have been organising for my college group, which is again not end to end encrypted unfortunately, yet it’s developers have proven to be trustworthy and respectful of their users’ privacy, so I assume it a risk worth taking.

I also completely agree with your point about using tools familiar to the general public in order to reach more audience.

Finally, I am delighted to hear that this particular webinar did not use Zoom. I have had to refrain from participating several of such events because they were hosted on Zoom.

PS: IFF’s working paper on technology interventions on COVID-19 has been an enlightening read. Thank you so much for publishing it!

Thank you Sreedev! We are attempting to set-up Big Blue Botton on our server, but it will come with associated server costs given it requires a high amount of processing power. This becomes a concern in the really challenging fiscal environment which requires IFF to conserve funds but as I stated earlier, we will make best efforts to choose tools with care for the privacy of participants.